The Senior Women’s National Football Championship will start on November 28 in Kerala. 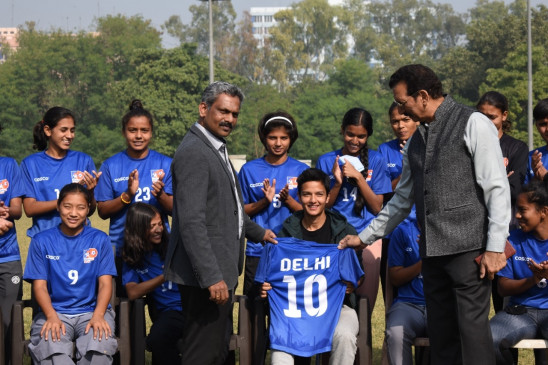 Digital Desk, Trivandrum. The Senior Women’s National Football Championship (NFC) is set to kick off in Kerala on November 28. About 32 teams are participating in this tournament, which is divided into eight groups and all these matches will be played at Municipal Stadium, Kothupramba, EMS Corporation Stadium, Kozhikode, Kalikut University, and Kalikut Medical College. ۔

The winning teams in the qualifying matches will play in the semi-finals, the two winning teams from the last four will reach the final. The Football Delhi Selection Committee has appointed midfielder Deepika Venkatesh as the captain of the Delhi team for this tournament.

Last year, Delhi captain Jyoti was ruled out of the team due to injury a day earlier. This is the first time since 2009 that she will not be part of the team. Delhi has been included in Group D along with Jharkhand, Karnataka and Goa, which will start its campaign from November 29.

Shaji Prabhakar, President, Football, Delhi, said, “Our women players have worked hard in the coaching camp and these players are getting the opportunity to play in the national championship after a gap of two years. This is definitely encouraging for the girls. Will help them improve their game.

The groups are as follows:

Group A: Manipur, Daman and Deo, Pondicherry and Meghalaya

Group B: Railways, Chhattisgarh, Dadra and Nagar Haveli, and Tripura

SBI General Insurance has announced the launch of a campaign to increase awareness of Indians around the need to buy health insurance to save...
Read more

Taking an adequate health insurance cover for you and your family is a sensible option. However, the quality of health care you get when...
Read more
Load more

How Much Protein In 1 Egg | Best Sources of Protein