PM Modi To Soldiers On Diwali: “Proud Of Your Role In Surgical Strikes” 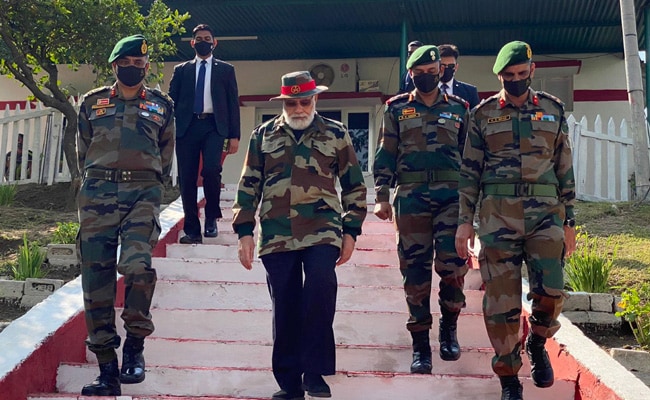 PM Modi celebrated Diwali at an Army division in Rajouri in 2019.

Prime Minister Narendra Modi on Thursday met soldiers in Jammu and Kashmir on the occasion of Diwali, keeping up with his practice of spending the festival with Army personnel. This year, the Prime Minister is celebrating Diwali with soldiers stationed near the Line of Control in the Nowshera sector.

“I am not here as your PM, but as a family member. I have brought blessings of crores of Indians,” PM Modi said while addressing soldiers in Nowshera.

“The moment I landed here, my heart was filled with thrill. This place’s present is an example of your bravery. You have given a befitting reply to all the conspiracies here in Nowshera,” he said.

This is the second time PM Modi is celebrating Diwali with troops in the district.

The twin border districts of Poonch and Rajouri have witnessed a spurt in violence and 11 soldiers have been killed over the last three weeks.

The army has been engaged in one of the longest anti-terrorism operations in Poonch-Rajouri forests area in the last 24 days. Nine soldiers have lost their lives in the operation but so far, there is no success against terrorists hiding in the region.

In 2019, the Prime Minister celebrated Diwali at an Army division in Rajouri, and this time he is celebrating the festival with soldiers in  Nowshera, which is close to the LoC.

Last week, two soldiers including an officer were killed in a mine blast in the same sector.

Washington: Pigs can certainly save lives, whether they have feathers or can fly. In a ground breaking first type of surgery, doctors at the...
Read more
TRENDING NEWS

I have not retired from politics: ex-Lok Sabha speaker Sumitra Mahajan

SBI General Insurance has announced the launch of a campaign to increase awareness of Indians around the need to buy health insurance to save...
Read more

Taking an adequate health insurance cover for you and your family is a sensible option. However, the quality of health care you get when...
Read more
Load more

How Much Protein In 1 Egg | Best Sources of Protein