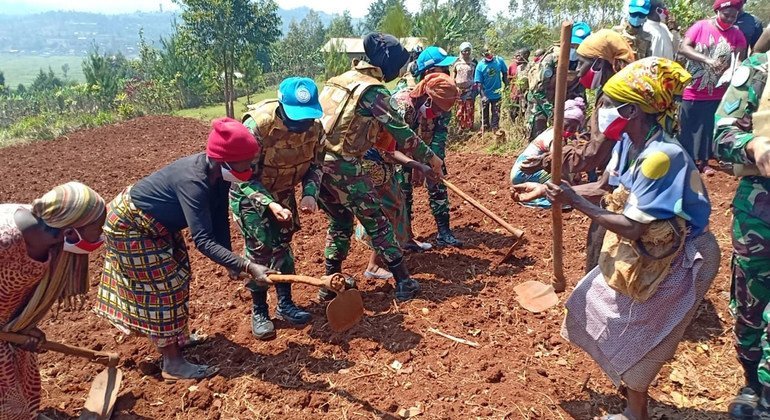 The UN chief addressed an open debate on diversity, statebuilding and the search for peace, organized by Kenya, which holds the rotating Council presidency this month.

“For countries emerging from the horrors of conflict and looking to a better future – indeed for all countries – diversity must not be seen as a threat.  It is a source of strength,” the Secretary-General said.

Stressing that” peace is not found in a piece of paper”, but in people, the UN chief spoke of how inequalities and weak governance can create the space for intolerance and extremism to grow, which can spark violent conflict.  Inclusion has the opposite effect.

By opening the door to inclusion and participation, “we take a giant step forward in conflict-prevention and peacebuilding,” he said.

“As countries look to build sustainable peace, they need to include and involve all segments of the population in the process of rebuilding communities and sustaining peace,” he added.

The meeting, chaired by Kenyan President Uhuru Kenyatta, was held because most situations on the Security Council’s agenda arise from internal conflicts in which identity issues—whether ethnic, racial, religious or socioeconomic–play a part.

The Secretary-General emphasized three areas for action, beginning with ensuring national institutions and laws work for all people, through protecting and promoting human rights.

“It means implementing policies and laws that protect vulnerable groups — including laws against discrimination based on race, ethnicity, age, gender, religion, disability, sexual orientation or gender identity,” he said.

Countries emerging from instability cannot afford to ignore the views of entire segments of their populations, which could fuel future resentments, the UN chief warned. Instead, they should explore ways to give greater voice to subnational regions.

“Governments must find ways to move people forward together, as one, through constant dialogue – recognizing and respecting differences – even if this means devolving some areas of authority,” said Mr. Guterres, speaking in French.

UN operations on the ground, he said, work to keep dialogue open and flowing between state institutions and local populations “so that everyone can have a hand in shaping their country’s future.”

For his third point, the Secretary-General stressed the importance of including women and young people because “building and sustaining peace requires their voices and actions.”

This is something which UN peacekeeping operations and special political missions strongly emphasize, he said.

For example, the UN mission in Somalia, UNSOM, has trained budding politicians from different political parties in the country. It also supported the authorities and women leaders in implementing a 30 per cent gender quota in national elections.

“As a global community, we must continue encouraging and supporting the full and active participation of women and young people in this journey,” the Secretary-General said.

As gender equality is among the 17 Sustainable Development Goals (SDGs), she said political processes, structures and working methods must be more responsive to women’s needs.

“In Afghanistan, for example, we want direct and face-to-face talks with the Taliban,” she told the Council. “You can include us in your own mediation teams. You can also facilitate a meeting of a delegation of our women with the Taliban. We want to do it for our sisters back home.”

In his address, President Kagame of Rwanda underscored how peacebuilding is an ongoing process.  While it will be impossible to prevent all conflicts, their intensity and impact can be minimized by remaining attentive to local needs and expectations.

“This means investing in the capacity of institutions and individuals so they can deliver the results that citizens expect and deserve,” he said.

Peacebuilding is also not purely technical but deeply political and human, he further stated, and consideration must be given to the emotions and memories that various parties bring to the negotiating table.

“Multilateral organizations such as the United Nations and the African Union have a central role in many situations.  Civil society groups, particularly those led by women also have a key role, as do business leaders.”

President Kenyatta of Kenya offered several recommendations for the international community, which included reviewing whether global institutions currently are “fit for purpose” in building a more inclusive world.

He also called for governments, the UN and social media companies to collaborate on combating hate speech and incitement.

“This can include an agreed global code of conduct by companies, and the development of early warning tools to detect escalation trends and facilitate pre-emptive measures,” he said.

“Climate adaptation must offer a clear and viable path to a green industrialisation for Africa and the Global South,” he said.

The way the inspections are done has changed little as well. Historically, checking the condition of electrical infrastructure has been the responsibility of men walking...
Read more

Here’s What Anju Mahendroo Had To Say About...
Read more
Load more